The renal adenocarcinoma is the most common type of tumour in the kidney. Its primary treatment is surgery. A large percentage of them are diagnosed incidentally, allowing in many cases a conservative treatment of the renal unit through partial surgery. In recent years, new technologies have been incorporated in their treatment, with lower morbidity, shorter hospital stays and the same oncological security. The procedures and techniques that we offer in our Centre for Urology in Madrid are the following:

What is a renal tumour?

A renal tumour (also known as kidney tumour) is an abnormal growth within the kidney. The terms “mass”, “lesion” and “tumour” are often used as synonyms. Tumours can be benign or malignant (cancer). The most common renal lesion is the presence of a fluid-filled area called a cyst. Simple cysts are benign and have a typical appearance on imaging studies. They do not evolve into a cancer and usually do not require follow-up nor treatment. Solid tumours of the kidney solids can be benign but over 80 percent of cases are malignant.

What statistical data do we have concerning kidney cancer?

In the United States, it accounts for 2% of all cancers. Kidney cancer is more common in men and is usually diagnosed in men aged between 50 and 70 years old. The most common kidney cancer is called renal cell carcinoma.

What risk factors are associated with kidney cancer?

The following can increase the risk of kidney cancer:

What are the symptoms of kidney cancer?

Many kidney tumours do not cause symptoms, but are detected accidentally during the assessment by some other unrelated problem. The compression or invasion of neighbouring structures can cause pain (in the sides, abdomen or back), the presence of a palpable mass and blood in the urine (microscopic or visible to the naked eye). If the cancer has metastasised (spread) beyond the kidney, the symptoms will depend on the affected organ. In some cases, the cancer cause clinical or laboratory alterations called paraneoplastic syndrome. This syndrome is observed in approximately 30% of patients with kidney cancer and can occur at any stage, even those limited to early kidney disease.

How is kidney cancer diagnosed?

What are the treatment options for tumours that appear to be confined in the kidney?

When the tumour appears to be confined in the kidney (“localised” tumour), there are three main options of treatment: tumour resection, tumour ablation and tumour surveillance. Chemotherapy, hormone therapy and radiation therapy are not effective treatments for kidney cancer. 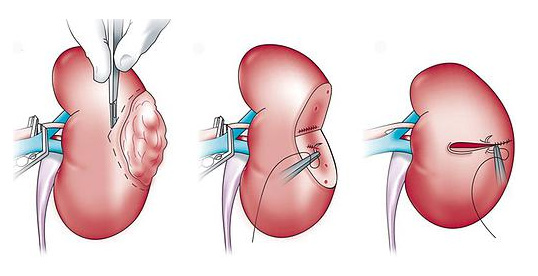 Resection of the tumour

Resection of the tumour is considered to be the standard mode of treatment for most patients and is achieved by surgery i.e. nephrectomy.

The aim of partial nephrectomy is resection of the entire tumour while preserving as much as possible of normal kidney tissue. The kidney tissue that is preserved can avoid the need for dialysis in case of greater kidney damage later. It is possible to perform a nephrectomy using a traditional incision (open surgery) or with minimally invasive techniques (laparoscopic surgery). 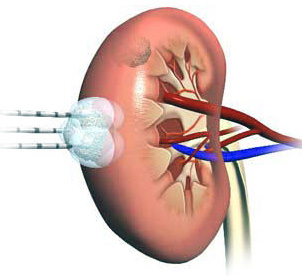 Tumour ablation destroys the tumour without removing it surgically. Examples of different technologies that can be applied for the ablation include cryotherapy, interstitial radiofrequency ablation by localised, high-intensity focused ultrasound (HIFU), microwave thermotherapy and laser coagulation. Ablation can be performed by laparoscopic or percutaneous (through the skin) surgery.

As the ablation of a kidney tumour is a relatively new procedure, the long-term results are still unknown. However, ablation may be less invasive than nephrectomy and may be useful in patients who cannot tolerate more extensive surgeries.

This is not a standard treatment option, but it can be considered for patients who cannot tolerate the resection or ablation of the tumour. It can also be considered as an adjunct treatment to standard forms of treatment, especially when the tumour presents active bleeding.

Embolisation can stop the bleeding and allow the doctor to stabilise the patient before surgery.

You can find out more about which cookies we are using or switch them off in settings.